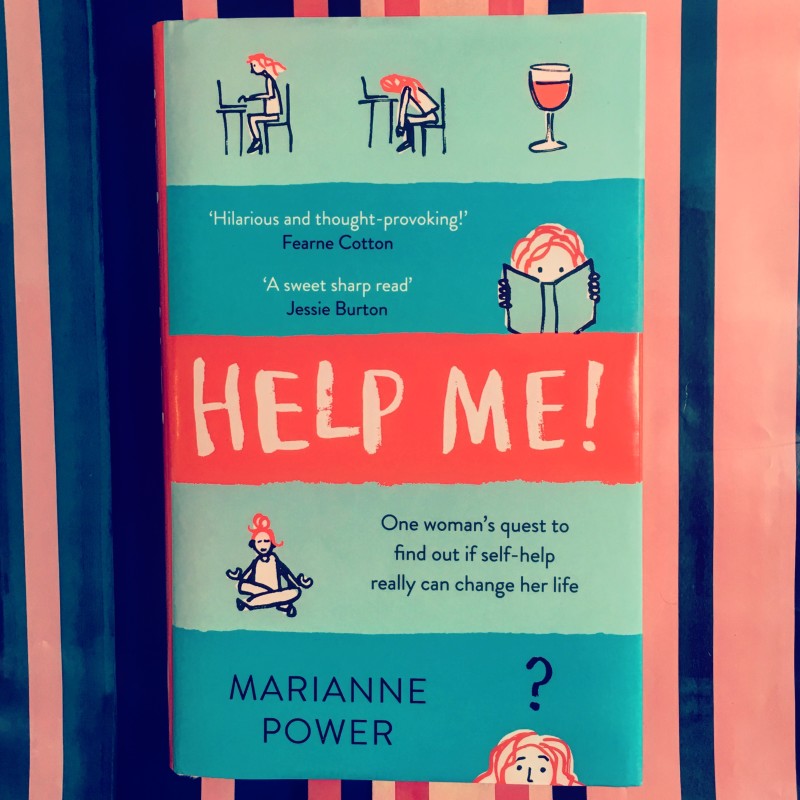 Book Review and Author Q&A: Help Me, by Marianne Power

Over Christmas and the New Year I read the book Help Me, by Marianne Power. Marianne decided one November day, that she would read 12 self help books in the coming year- one a month. Her goal was to live her life, exactly how each book was suggesting for the month she was reading it and see what happened. Her book is the story of what unfolded.

I found Help Me funny, honest, poignant and thought provoking. Marianne comes across as an extremely likeable person, and by the end of the first chapter you feel as if you know her.

The first book she read was ‘Feel the Fear and Do It Anyway’, by Susan Jeffers, in which Susan says we should do something that scares us every day. As a result, Marianne wrote a list of 20 things she wanted to try and do that month that scared her. These included stand up comedy, confront someone who had done something to upset her, use the phone every day, and ask for a discount in a shop or haggle. One of the things this list highlighted was that everyone’s fears are different, and this is important. What is scary for one person, is a walk in the park for someone else. Bravery cannot be measured on the action, but on how one feels about the action.

Another approach she tried was Rejection Therapy with Jason Comely, whereby she had to get rejected by another person every day. This lead her to asking people for things that she never would have normally dared to. But what transpired is that people actually said yes to her most of the time. A big reason people don’t go for the things they really want is the fear of rejection, whether its a dream job, a romantic pursuit, or a favour from someone. The illuminating learning from this approach was that people will say yes far more than you would think, so as scary as it might be, just go for it. I found this very life affirming.

As a result of reading ‘F--ck It: The Ultimate Spiritual Way’, by John C. Parkin, Marianne then attends a retreat he runs. Some of the exercises in the retreat Marianne describes were fascinating to read and really showed the power group/partner exercises can have to illustrate a point or piece of learning to us.

These are just a few of the books Marianne reads over the course of her experience, and every book brought something different to the fore.

I was lucky enough to ask Marianne some questions about the book after reading it. Here is what we talked about:

Laura: I once heard an author talk about how she felt when she would meet someone who had read her book, which was a memoir. She described sometimes feeling almost defensive or vulnerable, as they knew so much more about her than she knew about them. Do you ever feel like this if someone tells you they’ve read your book?

Marianne: I once met a man who had read the book and his first question to me was 'have you shaved your legs?' because this is a theme running through the book, my laziness around hair removal (and hair washing, come to that) and that felt embarrassing and exposing. I've also been asked on national radio why I couldn't get a boyfriend, which was also embarrassing and exposing! But 99 times out of 100 I love it when people have read the book because there is an easiness in the conversation. I have admitted to all my shameful feelings and insecurities and as a result, people tend to be very open and honest with me too, which I really like. It cuts out a lot of the bullshit conversations and gets to the real stuff. Again 99 times out of 100 people who have read the book say it's like someone is reporting from the inside of their mind, 'this was like reading me', they'll say and so that's lovely. Straight away there's an understanding. We are all the same underneath.

L: In the book you say The Power of Now is your favourite, is this still the case? Why do you think this is?

M: Yes, it's written in a very weird way which means it's not an easy read but I still love it and refer to it often. Tolle describes the voice in our heads that is constantly criticising everything that we are doing and everything we have done. This voice plays over the stupid thing you said in a meeting, or feels angry about something that's been said to you. This voice always lives in past events or worries about future ones and stops us from enjoying the only thing that will ever give us peace, which is sinking into the present moment. Before I read The Power of Now, this kind of message would make me roll my eyes but thanks to Eckhart Tolle I now get it. He asks: do you have a problem right now? The answer 9 times out of 10 is 'no' and even when the worst thing is happening, in the moment you handle it. Often, we surprise ourselves at how well we cope. So take a deep breath, ask yourself if you have a problem right now? No? Now enjoy it.

L: Which do you think was your least favourite book and why?

M: I didn't get on with a book about how to talk to your angels by Doreen Virtue. A huge number of people get comfort out of the idea of talking to your guardian angels, and Doreen has a huge following, but it didn't work for me.

L: You’ve said that after reading your book some friends let you know they had been surprised to read just how unhappy you were in parts or how much you were struggling. How has this affected your friendships going forward?

M: My friends have been so wonderful about both being in the book and cheerleading me as the book has gone out into the world. They were shocked to read just how unhappy and hard on myself I was. When I get depressed I feel so useless and like a waste of space and that I have no right to feel this way, and so I tend to close a door and retreat from the world rather than bother my friends. It's going to be a work in progress for me to try to be more open. My nature is always to retreat and figure things out myself. I'm so glad that my friends have stuck around despite it all. I'm very lucky.

L: You talk about seeing a counsellor in the book. What advice would you give to anyone thinking about starting therapy?

M: I still see a psychotherapist and I hugely recommend it to anyone who can find the money to do it. They can see things in you that you can't see in yourself and their feedback is illuminating. There is also something very healing about being heard by someone, about blurting out all the stuff that is often kept bottled up or blurting out things you didn't even know you were feeling. Good therapists know how to ask the right questions in a way that friends, with all the best will in the world, sometimes don't. I hugely hugely recommend it. I also did something called The Hoffman Process which is a week long intensive therapy retreat. It was one of the most important things I've done in my life.

L: At the end of the book you talk about how the act of trying to be happier can be seen as selfish, but it actually can be the opposite. A little like the ‘apply your own oxygen masks first’ kind of idea. This is something I completely agree with and something my counselling clients can struggle with sometimes. The idea of spending an hour a week away from their family/friends/work, to talk about themselves is something people can really struggle with. I wonder if you want to say anymore about this?

M: When you are unhappy, you are not good for anyone. Even if you are keeping up the smile for your kids or colleagues, we know when someone is not really in the room. You are also often a worry. The greatest gift we can give to people around us - and the world in general - is to be the happiest version of ourselves, the most at peace and content . That is the example to give your children and that is what is going to make the workplace better and your relationship more loving. It's really really important to do what you need to do to address some of your issues.

L: It’s clear that you learned a lot through the experience, particularly summed up in the beautiful last paragraph. In terms of practical life changes/habits, is there anything you took from the books that you are still implementing today?

M: The Power of Now stays with me. The question: is there a problem right now? No, well, breathe. I haven't mastered it by any means because my brain still wants to make dramas out of everything! But it's a rule of thumb. And also Brene Brown's work has stayed with me. She says she doesn't like the term self-help because she doesn't think we're meant to do it on our own, we're meant to help each other. So I am working on being more open with my friends and also more helpful to people around me. She says that 'connection is why we are here' and I think she is right.

L: Towards the end of the book you talk about how some people had suggested to you that if you hadn’t met your ‘prince charming’ by the end of this experience, it will have been a failure. Why do you think so many people seem to be concerned with wanting there to be a romantic ending?

M: Because it's what we've been brought up with in films and fairytales. It's literally the message we've been given from before we could talk. I think that is changing now though. There are so many fabulous books about being single and fulfilled and books questioning the assumption that we should all have children. I have learned there are many ways to live a life and many ways to have and give love. It is ridiculous to me that we are surrounded by friends and family who really know us and love us and yet we pin all our hopes on one person, often one we don't even know yet, to give us total happiness. It's just not real and we are at risk of missing the love we have right now by looking for one that comes in the form of a romantic partner. Or if we have a romantic partner we put so much pressure on it to be everything that it cracks. F--K It by John C Parkin writes really nicely about being lighter in our relationships.

Help Me is available to buy now.